From the Verde Independent.

Someone call Disney. This is the stuff movies are made of. Here’s the pitch.

Echo, a 3-year-old mother wolf dog gives birth to five puppies at a breeders in California. They are among 160 wolf dogs that a judge has ordered put to death. Two of Echo’s puppies die, three puppies are stricken with parvovirus. Things don’t look good until a wolf rescue organization in Arizona goes to court and rescues “Echo.” The mom and three puppies thrive at the Arizona rescue and are cured of parvo. A woman and her 4-year-old daughter fall in love with Echo, who today hikes and howls in Sedona’s Red Rock Country.

Echo does not need a movie star to play her. She resembles a Greek statue as she stands on the edge a cliff at Doe Mountain in Sedona and howls in the wilderness overlooking Boynton Canyon, Fay Canyon and Long Canyon.

“She likes to howl,” said Krystalynn Gordon, who adopted the wolf dog with her daughter, Violet. 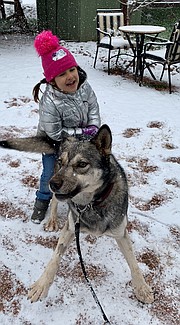 Violet and Echo play in their yard in Sedona. Photo courtesy Krystalynn Gordon

“I like to sit and rest” on the trail. “She gives me a minute and then she howls to get me moving.”

Gordon said if she get too far out of view on the hiking trail, the howling is sure to follow.

“I knew the moment I met her I wanted to adopt her,” said Gordon, who decided to become one of the 100 volunteers at Clarkdale’s Pets Return Home after the 35 wolf dogs were rescued in California in October.

At first she was concerned about adopting a wolf dog with a small child, but the rehabilitation was quicker than she thought it would be. “It’s worked out 100 percent,” she said. Echo understands Violet is a child and she is her protector.

When Echo first came to Arizona, she stayed away from people, paced the cage like the other mothers and was nervous around people. She was protective of her babies.

Now, she listens to commands and walks on a leash. Gordon recently brought her to dinner to an outside patio where she was popular with other diners.

Maiitsoh (wolf in Navajo) is the name of a 4-month-old pup adopted by Cottonwood’s Morgan and Matthew Medley from the California rescue.

Maiitsoh doesn’t howl, Morgan said laughing while comparing her to Echo, but makes softer noises. Maiitsoh gets along great with the couple’s small fluffy Pomeranians.

Morgan said they play and nap together and they are “best of buds … partners in crime.”

Pets Return Home still has 20 wolf dogs left to adopt from the original 50. These include the ones that made the trip and the ones born in Clarkdale. The available wolf dogs include 14 puppies and six adult females, owner Mark Happe said. Pets Return Home only received females and puppies, while the males from more than 160 wolf dogs rescued from California went to other rescues.

These wolf dogs were scheduled to be euthanized by California’s Lassen County officials after more than 160 wolf dogs were determined to be living at one breeder’s facility, Happe said.

Plan B to Save Wolves organization in Sedona, a non-profit wolf rescue group, worked on this massive rescue of wolf dogs for several months and the group appeared in court in California to ask for an extension of the euthanasia order, which was granted.

Plan B reported on its Facebook site in November that all the wolfdogs and puppies had been saved, and none were euthanized.

“The total lives saved is 179 as several litters were born after several pregnant mothers had left the property,” according to the Facebook post .

Wolf dogs are not for everyone

Most of the successful adoptions of the wolf dogs are from people in Arizona, and other states such as Texas, Montana, California, said Morgan, who is also the volunteer coordinator at PRH.

The wolf dogs require some special arrangements when adopted like a six-foot fence with dig-guards, no renters and in some cases lots of patience.

In many cases, other dogs and children are compatible with the wolf dogs, Happe said. PRH socializes the wolf dogs with other dogs during rehabilitation. They also introduce them to children before they get adopted.

When the wolf dogs were in California living at the breeders among 160 dogs, their wild-like instincts would dominate, Happe said. But when they are interacting with domestic dogs, they act more like domesticated animals.

“They get along great,” he said.

The PRH organization on Sycamore Canyon Road in Clarkdale was founded by Happe and takes in high-risk dogs from local humane societies’ kill lists that are deemed not trainable or undesirable. Happe works to retrain and rehabilitate them, or he offers them sanctuary and currently has 30 other dogs other than the wolf dogs.

None of the adoptions of the wolf dogs have been returned, Happe said, and none have problems. Two people called for “advice,” he continued, “no complaints.”

The organization did DNA tests on all the wolf dogs and found that the wolf-content was from 37.5 percent down to 5-percent wolf in the animals, Happe said.

The breeder in California started with wolves and dogs but the percentages diluted as the wolf dogs freely in-bred at the breeder’s rural facility, he said, two of the mothers were six years old, Happe said.

“If it’s a high content wolf dog, it’s going to require someone with a little bit more skill to manage the dog,” Happe said.

A Disney movie may still be down the road, but a popular social video publisher, The Dodo’s show “Comeback Kids: Animal Edition,” had a film crew in Clarkdale to do a story about another one of the wolf-dog puppies named Ryder and it’s set to come out next month, Morgan said.

They are calling the wolf-dog puppy, Ryder, a “comeback kid” story, Morgan said. The wolf dog pup was one of the wolf dogs that recovered from parvovirus while under Happe’s care in Clarkdale.

Happe said they set up a parvovirus ward at the Clarkdale shelter.

“They are not as bad as they could have been,” referring to the wolf dogs and their rehabilitation, said Happe. He thanked his volunteers who came forward to help with the wolf dog rescue. This included socializing with the dogs and making them adoptable.

“I’m more pleased than surprised.” Happe continued. “It’s a credit to the hard work done by the volunteers. The early intervention of having so many volunteers, so many people here in this early stages, touching and socializing with the puppies, and also using our dogs to socialize with those puppies.”

If you want to adopt a wolf dog or another dog at Pets Return Home, go to the website at www.petsreturnhome.com and press the adoption button. You can set up an appointment to visit or see the dogs.